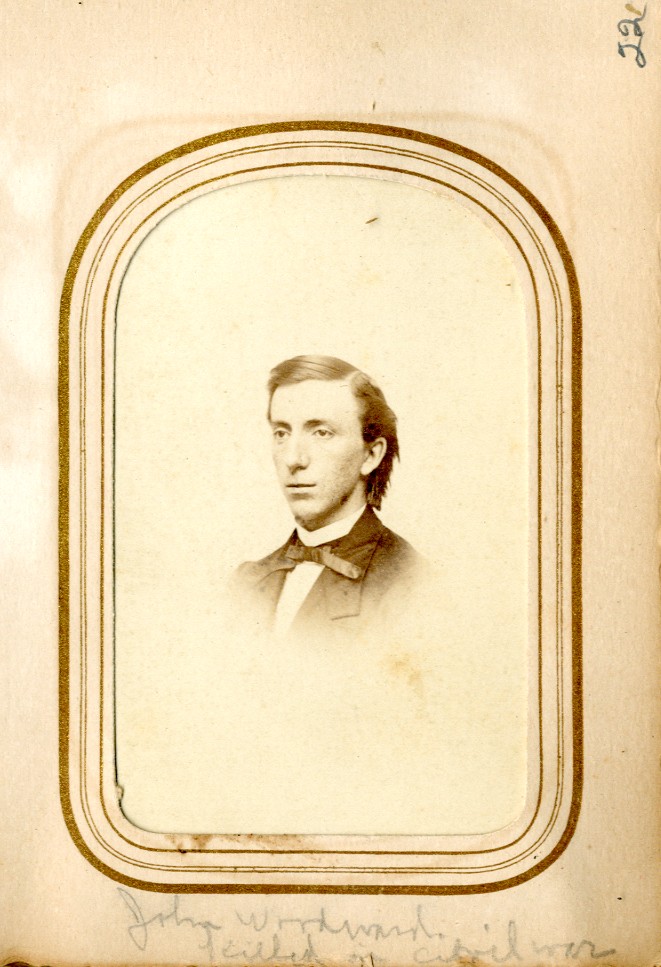 The son of Rev. John Hills and Emily D. (Morehouse) Woodward, was born in Westford, Vt., 16 June 1839. His father was a trustee of the University 1860-62, and chaplain of the First Vermont Cavalry, 1862-63, the regiment to which his son belonged. John W. was fitted for college mainly at Johnson, Vt., and entered college at the age of nineteen. He had talents of a high order with a special relish for poetry, oratory and romance, and a passionate fondness for music. He was "impulsive, often thoughtless, always gay and fun-loving; but frank, straightforward and truthful to his father," says one of his intimate college friends.

It was only by a continual struggle that he was kept from joining the army, as so many did, before the completion of his college course. He felt it a reproach, as he said, that his father and only brother were in the field, and he left at home with the women. He was commissioned captain in the First Vermont Cavalry 19 November 1862, and went to the seat of war the following January. Here he showed a capacity for command, and that combination of daring and judgment which is so indispensable in a leader of cavalry. His success in the critical enterprises on which he was dispatched at different times was such as to win the commendation of his superior officers. He fell at Hagerstown, Md., 6 July 1863, the third day after the last battle of Gettysburg, being shot through brain and heart while attempting to rally his squadron in the face of an overwhelming attack. Six days afterward his body was identified, and later received Christian burial in the Presbyterian cemetery at Hagerstown.

His desire to connect himself with his father's church in the fall of 1862 was somehow frustrated, but his moral purpose and Christian manliness were made clear by his participation in the army prayer meetings. He was of those "who in a short time fulfill a long time."

Source: University of Vermont Obituary Record, Compiled by a Committee of the Associate Alumni, No. 1, Burlingtom, 1895, pages 125-126.