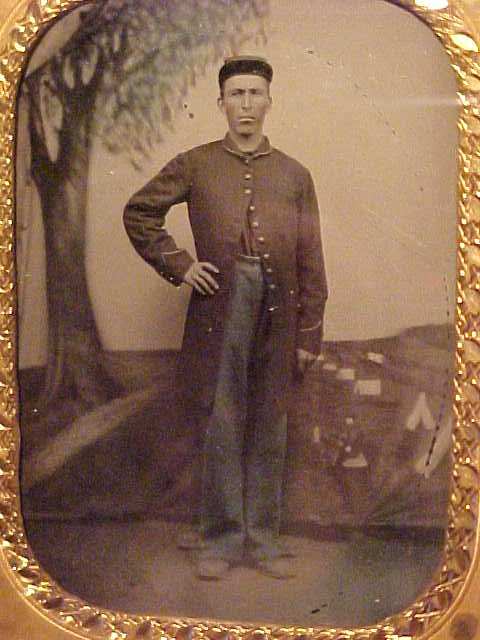 We are permitted to make the following extracts from private letters of S. F. Ailes, who went from Cambridge, in Capt. Grout's Co., to his wife, in the place. The first is dated April 29th

We are yet on Ship Island, but I don't know how long we shall stay. I don't think there is any prospect that we shall have any fight with the rebels. We have not seen any of them except some prisoners, who were taken before we came here. There are some 50 or 60 on the Island; some came of their own accord. There are quite a number of negroes, who came from the rebel shore, which is not far distant --- only 8 miles. We can see it very plainly from Ship Island. I went, last Sunday, on horse-back, up to the head of the Island, riding about 16 miles, and looking the Island all over. I saw all kinds of trees and shrubs. I saw two wild hogs, one dead, and one alive. I saw an alligator and many kinds of birds. There are orange trees growing, but I did non get sight of an orange. There are plenty of them on the other side of the bay, on the Mississippi shore.

The part of the Island where we are encamped is a barren desert, for there is nothing growing on it, nor can, for the sand is on the move all the time, like so much snow. It is dry 6 inches deep. It is very hot here, thermometer standing 90 to 100 degrees in the shade all day. The nights are cold. The dew is very heavy, almost as bad as a shower of rain.

The boys in our company are all alive yet, though some of them have the dysentery. We have very good fare --- at least I do, for I am on detail and don't board with the company. They grumble some, and don't think they live very well. I am at work at my trade) carpenter and joiner, and get $12 per month extra pay) If they do not stop building here, I shall not go back into the ranks again.

The following extract is from a letter dated the 5th inst.

We have got orders to march; where we don't know; we expect to New Orleans. We had marching orders Saturday, the 3d, and commenced packing our baggage Sunday. It was carried to the wharf by teams. We still remain in our tents, but expect every minute to be ordered to "strike tents". There are 4 regiments going with us; the 13th Connecticut, 8th New Hampshire, 12th Maine, and 8th Vermont are all going together. There are 224 of the 7th Vermont going to Fort Pike on fatigue duty; the balance is going to remain here for the present. There are 6 of our company that are to be left behind. They are all but one sick. Their names are Charles Boynton (whose father is to remain with him to take care of him), Blake of Eden, Rodney McGookin of Belvidere, A. Silver, one of the men that were drummed out at the Park, and Martin Willey of Waterville. The rest of them are able to go with us. Rodney has had the rheumatism since the 20th of March. He has done no duty since we left N. Y. Silver fell and hurt his hip the day we landed, and has done nothing since.

Killed in action, by the guerrillas, in Algiers, La., Corp. Sylvanius F. Ailes, of Co. A, 8th Vermont, from Cambridge, aged 35 years.