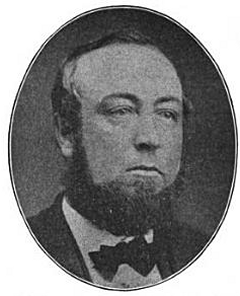 Among those who for one reason or another chose to leave Dartmouth for another college was Moore, who after remaining with us until after the fall term of junior year went to Tufts, where he was graduated in 1858. He was the son of James Spencer and Juliana (Comstock) Moore, and was born at Strafford, Vermont, May 15, 1834. He fitted for college at South Woodstock, Vermont, Academy.

But Dartmouth had attractions for him later, as he came back for medical lectures, and was graduated from the Medical College in 1860. He also took a medical diploma from the University of Vermont the same year. He commenced practice at Quechee, Vermont, remaining there until 1863, when he went to Ayer, Massachusetts, to take the place and practice of a physician going into the army. He remained at Ayer only about a year, going to South Royalton, Vermont, where he continued until 1872. During eight months of 1864-'65 he served as an acting assistant surgeon in the army. In 1872 he removed to Charlestown, New Hampshire, where, in connection with his practice, he was the proprietor of a drug store. But a fatal disease had fastened itself upon him so that he saw the necessity of giving up his profession, so he moved back to South Royalton, Vermont, where he died from a cancer, October 9, 1876.

He attended the Congregational church but was very liberal in his religious beliefs. In politics he was a Republican. He was a member of the Masonic order, as well of several medical societies.

His wife was Hannah Alzina, daughter of Richard Estabrook, of South Royalton, Vermont, to whom he was married January 1, 1860. They had two children, both living. Elmer E. is a graduate of Dartmouth and the University of Vermont Medical Colleges, as his father was, and James S. is a graduate of Brown University and Harvard Medical College. Both are married, and both in the practice of medicine at East Providence, Rhode Island, the mother living with the younger son.