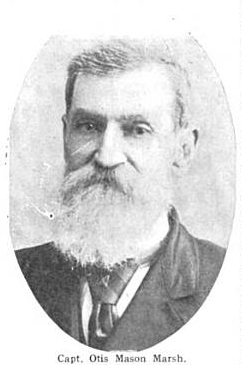 Otis M. Marsh, brother of Lieut.-Col. Samuel Marsh '39, was born in Hartland about 1821. His boyhood days were passed in Woodstock and Norwich. He entered the University in 1839, and graduated A. B., and M. C. E., in 1812. He entered the profession of civil engineering, and was first engaged on the Northern Railroad, in New Hampshire. He then was engineer of railroads in Ohio, Indiana, Kentucky, Texas, and Louisiana, and gained great distinction in his profession, but the detail of his work we have been unable to receive.

He served during the Civil War as captain Texas Infantry, Speight's Battalion, C. S. A. He participated in the engagement at Sabine Pass, and later was taken prisoner, and confined in a foul prison-pen in Kansas for many months. Soon after the war, he moved from Texas with his family to the southern portion of Acadia Parish, La., and from there to Lake Charles, La., in 1876, where he resided until his death. At the age of ten years, he became converted, and was an earnest and faithful member of the Methodist church. He held various positions in the church, and was for a number of years superintendent of the Sunday-school in Lake Charles. During the last years of his life, disease of the throat and lungs caused him partial loss of voice, and great suffering. He died, December 26, 1892, at his home in Lake Charles. His body, covered with the Confederate flag and the stars and stripes, was borne to the grave by his old comrades, the Confederate veterans.

He married a Southern lady, who with a son, Otis Mason, survives him.