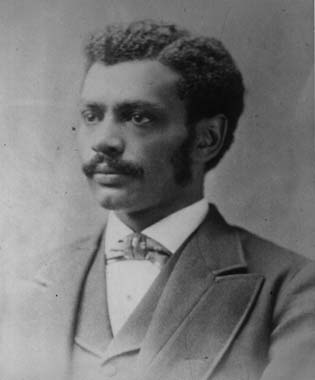 George Washington Henderson, son of Vincent and Harriet (Macy) Henderson, was born in Clarke County, Virginia, on November 11, 1850. Nothing is known of the first 14 or 15 years of his life, except that he was born a slave, was practically illiterate up to that time, became employed as a man-servant for a Vermont infantry officer sometime during the Civil War, and accompanied that officer to Vermont at the end of the war. During the next 70 years he went on to be a long-serving and eminently respected minister and professor of Theology, Latin, Greek and Ancient Literature.

Henderson received his basic education at Underhill Academy, under the tutelage of Principal Oscar Atwood (UVM '64), and prepared for college at Barre Academy in 1872 and 1873. He graduated from the University of Vermont in 1877, first in his class. He was also the first African American initiated into Phi Beta Kappa, the oldest collegiate academic honor society in the country. The Burlington Free Press commented on his commencement speech: "Mr. Henderson's effort, in point of interest and ability, as well as of earnestness and excellence of delivery, asked no odds of any other on the programme. When it is considered that its author was born a slave and twelve years ago had not learned to read, its maturity of thought and good taste in presentation must be considered truly marvelous."

He went on to earn a Master of Arts degree from the UVM in 1880, a Bachelors of Divinity from Yale Divinity School in 1883, and, as a recipient of a Hooker Fellowship for Excellence in Theological Studies, spent an additional year of study at Yale, and a further year at the University of Berlin, Germany.

Henderson served as principal of Jericho Academy in 1875 and 1876, Craftsbury Academy from 1877 to 1880 and again from 1886 to 1888, and Newport Graded School in 1885 and 1886. From 1888 to 1890, he was pastor of the Central Congregational Church, New Orleans, and in 1890 accepted the position of university pastor as well as the chair of theology at Straight (now Dillard) University. Perhaps not so coincidentally, Oscar Atwood had become president of Straight University. In 1896, Atwood accompanied Rev. Henderson back to Vermont for a short visit, the occasion being UVM's bestowing on him an honorary degree of Doctor of Divinity. The Burlington Free Press, commenting on the occasion, said Henderson was "recognized today as standing in the front ranks of religious and scholarly men who are doing so much to promote the civilization and intellectual character of the country."

Another connection between President Atwood and Rev. Henderson was their membership in UVM's Delta Psi Fraternity, although their initial membership was about 12 years apart. Another fraternity brother, from the Class of 1879, was John Dewey, noted philosopher and educator; Dewey and Henderson were fellow students at UVM for two years.

After 14 years in New Orleans, where he also served as pastor of the University Church, Rev. Henderson removed to Nashville, Tennessee. From 1904 to 1909 he was Dean of Theology at Fisk University in that city. In 1909 he moved to Xenia, Ohio, where he served as professor of Latin, Greek and Ancient Literature at Wilberforce University until his retirement in 1932.

He also served as assistant moderator of the National Council of Congregational Churches in Syracuse, New York, in 1895; lectured at the theological seminary at Edward Waters College, in Jacksonville, Florida, in 1923 and 1924; lectured in the Atlantic (Iowa) Chautauqua at the summer sessions in 1921 and 1924; edited the homilectic department of the African Methodist Episcopal Church Review of eight years, and in 1918 edited the Wilberforcean.

Rev. Henderson was twice married. His first wife Hattie Eliza Gage, daughter of James and Julia (Nelson) Gage, was preceptress at Craftsbury Academy while he was principal there. They were married August 18, 1884, in Craftsbury, and Hattie accompanied him to Germany during his year of study there. Tragically, Hattie died of complications from childbirth on March 22, 1886, and the surviving child, Willard Atwood Henderson, succumbed to consumption on November 29. After moving to Louisiana, Rev. Henderson was married again, on April 2, 1889, to Mary Virginia Harris, of New Orleans.

Rev. Henderson died February 3, 1936, in his 86th year, and is buried in Cherry Grove Cemetery, Xenia, Ohio. He was survived by his wife of nearly 43 years.

In addition to all his other activities, Rev. Henderson published several literary works. In 1894, he authored "First Memorial Against Lynching," which he sent to the Louisiana legislature. In 1898, he authored a 16-page pamphlet on soldiers of the Spanish-American War, honoring all that served, and especially noting the four colored regiments which made a noteworthy record at Guasima, El Caney and San Juan Hill, Cuba. In 1917, he published "Sermon Studies. Studies upon the Important Themes on Religion, and Exposition of Difficult Passages of the Scriptures," (Press of the A.M.E. Book Concern, Philadelphia), which included a series of sermons he contributed to the "African Methodist Episcopal Church Review."

In a biographical sketch of Rev. Henderson in the University of Vermont Alumni Magazine, April 1968 Margaret Hazen Muller speculated Ward was Henderson's benefactor, but there is little to support her claim. She bases her assumption on an off-handed remark in a letter written by Ward from Danville, Virginia, in mid- to late-April, 1865. He mentioned "darkies that come into the army" (camp), and the fact that he had "a darkey boy about nineteen or twenty--a real good boy. Perhaps I shall take him North when I go," the assumption being he was one of those coming into camp during that time. First, the boy's age does not correspond with the preponderance of vital data known about Rev. Henderson. His age, as listed in at least three U.S. Censuses (1880, 1920 and 1930), and his obituary, agree, within a year or two, with his own declaration on his marriage certificate, that he was born in 1850. Second, it makes no sense that an emancipated slave, especially a youngster, would leave his area of nativity and move south, deeper in to the rebellious states. If anything, he would have gone north; his home county bordered on the newly-created Union state of West Virginia, and was not far from Maryland, a border state that stayed in the Union for the duration of the war. Finally, Muller appears to assume that Henderson would have lived in Underhill, where he went to school; thus her selection of Ward. This writer's experience with students in other town academies shows that students came from a variety of different towns, as long as they could afford the tuition. 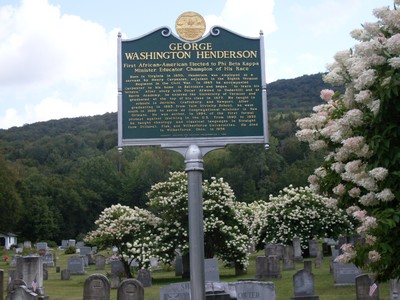 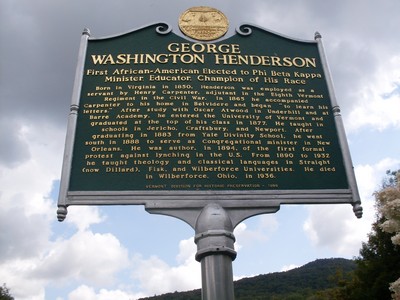 First African American Elected to Phi Beta Kappa
Minister. Educator. Champion of His Race
Born in Virginia in 1850, Henderson was employed as a
servant by Henry Carpenter, adjutant in the Eighth Vermont
Regiment in the Civil War. In 1865 he accompanied
Carpenter to his home in Belvidere and began "to learn his
letters." After study with Oscar Atwood in Underhill and at
Barre Academy, he entered the University of Vermont and
graduated at the top of his class in 1877. He taught in
schools in Jericho, Craftsbury and Newport. After
graduating in 1883 from Yale Divinity School, he went
south in 1888 to serve as Congregational minister in New
Orleans. He was author, in 1894, of the first formal
protest against lynching in the U.S. From 1890 to 1932
he taught theology and classical languages in Straight
(now Dillard), Fisk, and Wilberforce Universities. He died
in Wilberforce, Ohio, in 1936


The above historic roadside marker in Belvidere states his benefactor was Henry Carpenter. Without knowing the Vermont Division for Historical Preservation's source for the information, on the surface, Carpenter appears to be a better choice. The 8th Vermont Infantry spent several months at the end of the war, from November 1864 to April 1865, in camp at Point Summit, in Clarke County, Virginia, where Henderson was born.

Clarke County, in northwest Virginia, is east of Winchester; Berryville is the county seat.

"The View," from the University of Vermont

The Project Gutenberg EBook of The American Missionary, October, 1890, Vol. XLIV., No. 10, by Various

Craftsbury Historical Society. A Craftsbury Album: Images of the Past, 1989.

Peck, Theodore S., compiler, Revised Roster of Vermont Volunteers and lists of Vermonters who served in the Army and Navy of the United States During The War of the Rebellion, 1861-66, (Press of the Watchman Publishing Co., Montpelier, Vt., 1892)

We are glad to copy from the Burlington (Vt.) _Daily Free Press_ the following commendation of two of the appointees of this Association, both graduates of the University of Vermont. Mr. Atwood enters our service for the first time; Mr. Henderson has already shown his efficiency in our work as a preacher, and will enter upon his duties as a Professor under favorable auspices.

An eminently satisfactory and well-merited appointment is that of Mr. Oscar Atwood of Jeffersonville, to be President of Straight University in New Orleans. We can heartily congratulate the institution that it can avail itself of the sound scholarship, the long experience, and the tried executive ability of its president-elect. And no less do we congratulate Mr. Atwood on his election to a post which will afford ample scope and stimulus for the best that is in him. Straight University was founded twenty-one years ago, and was designed especially for the education of the colored youth. It is under the patronage of the American Missionary Association, and has several departments in full operation. Mr. Atwood took his A.B. degree at the University of Vermont in 1864; taught for a time in various schools, including the academy at Essex, this State; for two years was principal of the school at Underhill; then for seven years, 1871-78, was master of the High School at Plattsburgh, from which place he was called to a similar position at Rutland. After nine years successful labor there, he was forced to resign three years since on account of continued trouble with his eyes. He has an excellent record both as instructor and organizer and manager of school work. No better evidence of his efficiency could be desired than the large number of young men who have been stimulated by him to obtain a liberal education.

We learn also that the Rev. George W. Henderson, of the class of 1887, U.V., who for the last two years has been preaching in New Orleans, has been appointed to a professorship in the same institution. Mr. Henderson was originally a slave, as some of our readers know. He was prepared for college by Mr. Atwood, took high rank at the University and at Yale Theological Seminary, where he was graduated in 1883. He studied for a time in Germany, and for a few years was principal of an academy in this State. His work, we understand, is to be in the theological department, a position for which he is well equipped. The American Missionary, October, 1890, Vol. XLIV., No. 10

The Project Gutenberg EBook of The American Missionary, October, 1890, Vol. XLIV., No. 10, by Various

(not paginated in online version)