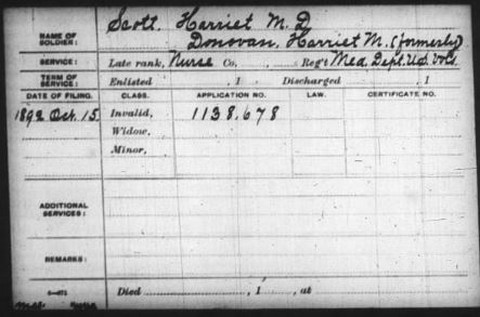 Although she served as a nurse in the Civil War for more than two years, being on the battlefield at Gettysburg for seventy-two consecutive hours, Mrs. Harriett Scott of 3 Jackson street, Charlestown, will not, according to her statements, benefit by the recent passage of the army nurse bill, granting a pension of $12 a month to nurses who served in the Civil War.

The nurses are required to have served at least six months in order to be eligible to the pension, and the only record of Mrs. Scott's service on file at the War Department lacks three days of serving six months at the Armory Square Hospital in Washington. The rest of her record, which she says was kept by the superintendent of nurses, Miss Dix, is believed to have been lost in the Ford Theater. Mrs. Scott has repeatedly tried to obtain a pension, and affidavits of officers under whom she served in Fredericksburg and at Gettysburg have been sent to Washington, but they were of no avail. Mrs. Scott was living in Orleans County, Vt., when the war broke out and, according to her story, went some distance from her home to where the Vermont troops were in camp. Here she assisted them and later was selected by Miss Dix to go to Washington, where she was the night attendant in the Armory Square Hospital. After being there almost six months, she was ordered one night to proceed at once to Fredericksburg, where she remained for over a year, making trips on the transports carrying wounded men from Quire Creek and Fredericksburg to Washington.

For two days and one night during the battle Mrs. Scott was on the field at Gettysburg, and it was only after one of the officers had carried her down to the transports and placed her aboard and told her she was wanted at once in Washington to assist the nurses there, that she left. Mrs. Scott suffered terribly at Gettysburg. She had nothing to eat during the seventy-two hours and was forced to drink muddy rain water from the roads to quench her thirst.

Six days after the battle she returned to her home in Vermont all worn out by her work on the battlefield, and remained here for some time.

Mrs. Scott said yesterday that she would never try again to secure a pension, as several attempts she has made have failed.