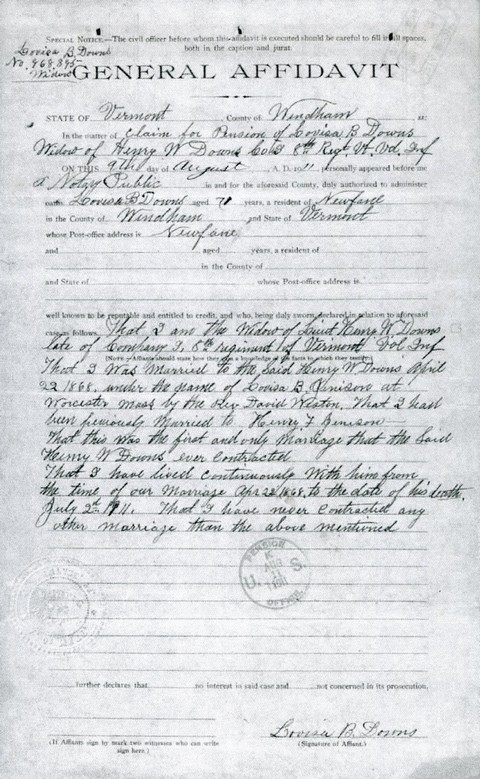 Death of Mrs. Lovisa B. Downs.

Mrs. Lovisa B. Downs died Monday evening, after failing in health for several months past. Her advanced age made it difficult for her to rally from what appeared to be a slight shock.

She was well known in Newfane and well remembered for her service as an army nurse during the Civil war, since when she was an active member of the Women's Relief Corps.

In early life she devoted herself to nursing. When the Civil war began and hospital nurses were needed, she gladly and faithfully served her country in this way.

Her first husband, Henry Jenison, gave his life early in the war, but she served until the end, and afterward, so long as needed. Later she married Henry Downs, a Civil war veteran and their home was in Newton, Mass., where their one son, Arthur W. Downs, was educated and grew to manhood. Her second husband, Henry Downs, died when past 60 years of age in the Soldiers' Home at Dayton, Ohio.

After his death she came to Newfane to care for her father and step-mother in their old age and for several years was engaged in this filial duty. During the last six years she had lived by herself in Newfane, leading a quiet life but finding much to occupy her time with extensive reading and social joys among her many friends. Her son, who is an efficient salesman, employed in town, has visited her frequently and spent several weeks with her in November and December, after she began to fail in health.

Mrs. Downs was a member of the Baptist church in Brattleboro, where she kept her connection for many years. She was an earnest advocate of temperance and belonged to the Women's Christian Temperance Union in Newfane. Her nephew, Milton Halladay, of Providence, R.I. ,and niece, Mrs. May (Halladay) Hunt, of Bellows Falls have been like her own children to her since the death of their mother, her only sister, and several winters she spent with them. The funeral will be held Friday at 2 p.m., in the Congregational church, when it is hoped her son can arrive in season to be present.