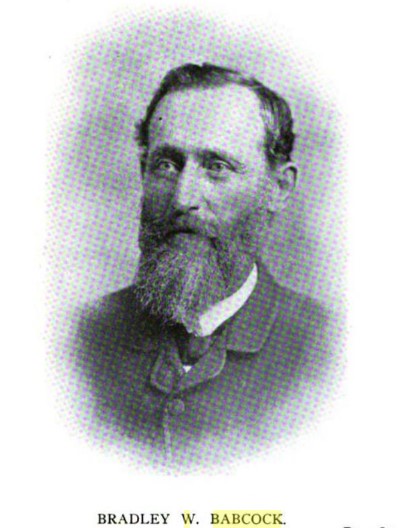 Bradley Whitney Babcock, last born to Peabody and Huldah (Whitney) Babcock, was b. in Franklin, V.t,. Mar. 20, 1833. He was m. in Campbell County, Va., to Miss Mary Elizabeth Cordwell, daughter of John and Mary (Barger) Cordwell.

Mr. Babcock removed from Vermont to Virginia when he was but 21 years of age. He served in the 5th Virginia Cavalry, of the Confederate Army, during the War of the Rebellion, and was a First Lieutenant. He was badly wounded twice, and reached home before the surrender of Gen. Lee, at Appomattox Courthouse, about eight miles distant from his home. His eldest son, Homer C. Babcock, owns a part of this battlefield, and even now relics are found upon this battlefield, made an historical spot for all time to come.