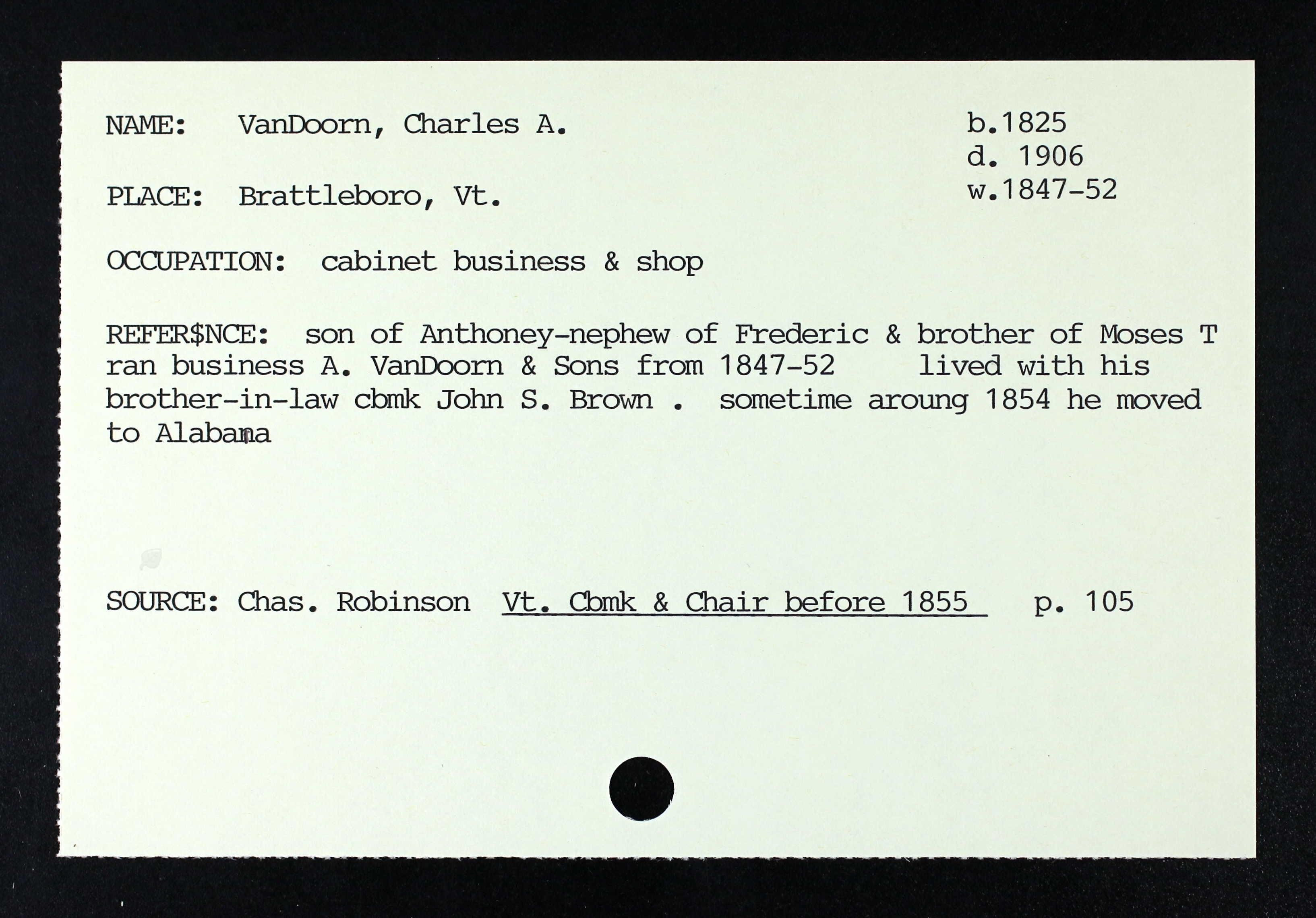 Charles A. Van Doorn, who has resided for several years in Alabama where he was conscripted into the rebel army, has deserted and returned to Brattleboro, his former residence.

Personal. - Charles A. Van Doorn, who for several years has been residing in Alabama, has recently returned to his native town. Having been compelled to serve in the rebel army, and to fight against his country's flag, he was glad when an opportunity occurred to escape from the rule of Jeff Davis. He was in Johnston's army, near Atlanta, and taken prisoner in one of the battles near Chattahootchie, and being allowed to take the oath of allegiance he availed himself of the desired opportunity, and is now safe on the scared soil of Vermont. He represents the rebel cause as desperate, and rapidly on the decline. He thinks that Sherman's chance of success are as ninety to one. The Southern country in that quarter is drained of its able-bodied men, and the soldiers in the rebel army are sick of the war, and a large portion of them would cheerfully come under the 'old flag' if they had a good opportunity to do so. He gives a hopeful account of the prospects of our bringing the war to a successful issue.

A respected citizen who had varied experiences and an interesting army record passed away at exactly noon Sunday in the death of Charles A. Van Doorn, 81, of West Brattleboro. On Sept. 30, 1904, Mr. Van Doorn sustained a shock of paralysis, followed by a second shock the next day. He had been in feeble health since then. He did not feel well Sunday morning and remained in bed. Just before 12 o'clock he spoke to Mrs. Van Doorn and said: "Addie, what time is it?" Mrs. Van Doorn replied that it was 12 o'clock and immediately the clock struck. As it did so Mr. Van Doorn made a sound and as Mrs. Van Doorn turned to him she saw that he was dead. Death was caused by a stroke of apoplexy.

Mr. Van Doorn was born in Brattleboro Jan. 3, 1825, and was one of five children of Anthony and Betsey (Hubbard) Van Doorn. The house where he was born stood where the Baptist church in West Brattleboro now stands, two doors east of his late residence. When he was a young man he and his brother, Moses, entered into partnership with their father in the cabinet making, furniture and funeral supply business, their shop standing where Emerson & Sons store now stands. Subsequently he went to Alabama on account of his health and engaged in the furniture trade in Eutaw and Montgomery. Carrying on the business for the 10 years preceding the civil war. He also was interested in horse and cattle raising.

Not being in sympathy with the idea of the South seceding, and having a brother-in-law named John S. Brown t letters, the southerners became suspicious that Mr. Van Doorn was in league with John Brown, the celebrated abolitionist, and they held up his mail during the time of the agitation preceding the war. For 2 ˝ years his parents did not hear from him and they supposed he was dead. On one occasion a company of men surrounded his house for the purpose of doing him bodily harm, but he was armed and could not be intimidated. He was "ready to fire at the drop of a hat himself, " as one man expressed it, and the company withdrew without molesting him.

A little later he was taken prisoner, " for safe keeping" he was told. The he was forced to take up arms against the North and was in the service two or three years. He was treated kindly, although his sympathies were with those against whom he was fighting. One day, when standing over the camp kettle, when no one suspected danger, he seemed to hear a voice say to him, "Van, get down." He did so and immediately a bullet whizzed over his head and buried itself in the ground nearby. It was dug out by the surgeon.

While marching with his company one day Mr. Van Doorn became very tired and sat down by a tree, nearly exhausted. He soon was left behind and fell asleep. For three days he remained alone, subsisting on blackberries. Finally he saw Union soldiers coming. They demanded his weapons, which he gave them cheerfully. He was glad to go with them a prisoner, and it was not long before he was released and went to Illinois.

After the war he went back to Alabama to see what had become of his property. His ranch was left, but his horses, cattle and hogs, numbering several hundred head, had disappeared and his furniture business had been disposed of. A comfortable fortune had vanished.

Then they went to Greenfield and for more than 20 years Mr. Van Doorn conducted a crockery and glassware store, building up a successful business. On account of ill health he retired from business five years ago last April and returned to Brattleboro.

Mr. Van Doorn was a man of excellent business judgment and of absolute integrity. He was a man of refined nature and taste, kind hearted and sympathetic and devoted to his home. He was a member of the Baptist church in West Brattleboro, was deeply interested in its affairs and was active in its work as long as he was able. He is survived by his wife, one daughter, Mrs. W. A. Burton of New Bedford, Mass., and one sister, Mrs. John S. Brown of Brattleboro.

The funeral was held at the house at 2 o'clock yesterday, Rev. J.A. Mitchell, pastor of the West Brattleboro Baptist church officiating. There were many beautiful floral remembrances. Miss Caroline Clark of Middlebury college sang, "Face to Face" and Mr. and Mrs. L. W. Hawley sang " Asleep in Jesus." The burial was in Prospect Hill cemetery, the bearers being Malcolm Baldwin of Chester, Irving R. Baldwin of Montague City, A. L. Baldwin of Somerville, W.A. Burton of New Bedford, and H.F. Jordan and J.L. Barney of Brattleboro. Others present were Mrs. Franc E.Clark of Waltham, Mrs. W.A. Burton and daughter Elizabeth of New Bedford and I.R. Baldwin of Montague City.