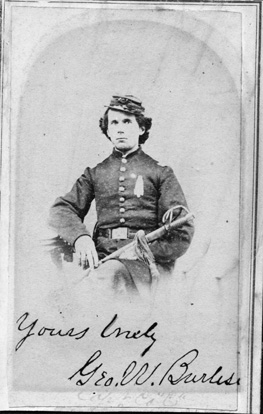 One of the most eminent lawyers of Saint Albans, Vermont, is Captain George W. Burleson, whose portrait appears on the opposite page, and who is a veteran of the Civil war, and a descendant on the paternal side of a family who came to this country from Scotland, one branch of which settled in Connecticut and the other in Louisiana. Captain Burleson is descended from the Connecticut branch. Job Burleson, grandfather of George W. Burleson, was born in Connecticut June 19, 1762, and remained a resident of that state for many years; later he removed to Cattaraugus county, New York, and devoted his attention to farming and distilling. He was very successful in his management of these enterprises, and became one of the prominent and influential men of the community. He was united in marriage to Abigail Bowdish, and the following named children were born to them: Job, born August 11, 1784; Ichabod, born October 26, 1786; Peter, born September 12, 1788; Charles, born August 23, 1790; Return, born August 13, 1792; Alvah, born August 15, 1794; Sally, born December 16, 1796; Owen, born June 8, 1798; Silas, born September 29, 1800; Caleb N., born August 13, 1802; and Gardner, born December 14, 1804. The father of these children died in Cattaraugus county, New York, March 18, 1827.

Colonel Joseph Bowdish, maternal grandfather of George W. Burleson, was a son of peter, and he in turn was a son of Joseph Bowdish. Colonel Bowdish was born in Preston, Connecticut, August 8, 1766, and subsequently removed to Fairfield, Franklin county, Vermont, where he engaged in agricultural pursuits; he held various local offices in the town and was also an active member of the Congregational church. Colonel Bowdish was an active participant in the Revolutionary war, serving with distinction in many of the battles. On August 17, 1796, he was united tin marriage at Fairfield, Vermont, to Amanda Butler, who was born at Norfolk, Connecticut in 1780. Their children were: Orissa, born May 28, 1797; Clo, born August 25, 1799; George W., born November 12, 1801; Amanda H., born February 15, 1804; Joseph, born December 26, 1805; Fannie, born December 1, 1808; Abigail, born June 28, 1811; Cloe, born June 7, 1813; and Isaac, born October 3, 1815. Colonel Bowdish died April 19, 1820; his widow died April 12, 1841.

Caleb N. Burleson, father of George W. Burleson, was born in Cattaraugus county, New York, August 13, 1802, and his early education was obtained in the common schools of the vicinity. He then entered a New York medical college, and after his graduation engaged in the practice of medicine and surgery in Franklin, Vermont, and later established an office I East Fairfield, Franklin county, where the remainder of his life was spent. During the early years of his manhood he voted the Whig ticket, but subsequently gave his support to the Democratic party. Mr. Burleson married, for his first wife, Diana Stevens, and their children were: Solomon, who became an Episcopal clergyman, and at the time of his death was serving as a missionary to the Oneida Indians in Wisconsin; he married Abigail Pomeroy, of Fairfield, Vermont, and they had five sons and three daughters; Rev. Allen, who is rector at Shasta Valley, California; Rev. Hugh, dean of the diocese of North Dakota, located at Fargo; Rev. John, located at Grand Forks, North Dakota; Rev. Edward Wells, located at Larramore, North Dakota; Rev. Guy Pomeroy, now a member of the graduating class at the Episcopal Seminary in New York; May, who resides at Grand Forks with her mother; Martha, wife of Dr. Wintermute, located at Kilburn, Wisconsin; and Abby, wife of C. E. Kelsey, a lawyer at San Juan, California. Emma, the other child of Caleb N. Burleson, was the wife of I. G. Bowman, and died in 1864, leaving two children, homer C. and Marion A. Bowman, now of Topeka, Kansas. For his second wife Mr. Burleson married Amanda Bowdish, of Fairfield, Vermont, and one child was born to them, George W. Burleson. Mr. Burleson died January 21, 1887.

George W. Burleson was born in Berkshire, Vermont, March 23, 1845; early in life he removed to Franklin, where his education was acquired in the Franklin Academy. On May 19, 1861, he enlisted as a private in Company C, First Vermont Regiment, and served for three years. The regiment was forwarded to Newport News under command of Lieutenant Colonel Peter T. Washburn, lager governor of Vermont, and Colonel Phelps. Their first engagement was at Big Bethel, and after participating in several other battles, his term of enlistment having expired, he returned to Franklin, Vermont, and on October 15, 1861, re-enlisted in Company K, Sixth Regiment, under Colonel Nathan Lord, which constituted part of the old Vermont Brigade, and later became a part of the Army of the Potomac. He participated in the following named battles: Lee's Mills, Williamsburg, Fair Oaks, Seven Days' battle, second Bull Run, three engagements in front of Fredericksburg, Cold Harbor, defenses of Washington, Antietam, both battles of Fredericksburg, Mine Run, second Cold Harbor, Wilderness, Gettysburg, a series of engagements in front of Petersburg, and just before the close of the war at Sailor's Creek, Farmville, Winchester and Cedar Creek. Captain Burleson enlisted as sergeant in Company K, was made quartermaster in the fall of 1862, quartermaster sergeant in the fall of 1864, first lieutenant shortly afterward, and was then promoted to the rank of captain, being mustered out of the United States service at Burlington, Vermont, in July 1865. During the entire term of his service he received only three wounds, one of them a shell wound in the side, which he received April 2, 1865, in the battle in front of Petersburg.

After his return from the war Captain Burleson studied law with the firm of Fitch & Newton at Highgate, Franklin county, Vermont, and was admitted to the bar in 1876. He has been in active practice in Saint Albans since that time, and his high reputation as a lawyer has been won through earnest, honest labor, and his standing at the bar is a merited tribute to his professional ability. In 1884 he acted in the capacity of state's attorney for Franklin county, resigning from his office in order to accept a position as deputy in charge of the customs of Saint Albans, district of Vermont, which was tendered to him in 1886. The customs port of Saint Albans is one of the most important sup-ports in the United States, employing, besides the deputy, sixteen sup-deputies; the average yearly receipts of all the merchandise received being $7,928,166, upon which duties assessed amounted to $3,820,677.78, and which is covered by 15,059 entries. On January 1, 1903, he was promoted to the position of special deputy collector of customs for District of Vermont, with headquarters at Burlington, Vermont.

Captain Burleson was united in marriage to Irene E. Spaulding, a daughter of Lemuel G. Spaulding, of Vermont, and the following named children have been born to them: Emma, wife of G. h. Hill, an agriculturist of East Fairfield, Vermont; Eugene H., married Winifred Beals, a native of East Fairfield, and their two children are Max I. and Lou I. Burleson; Lou I., deceased; and George S., who married Lillian T. Tague, studied law with F. S. Tupper at East Fairfield, and is now in the active practice of his profession at Highgate.

Fairfield Veteran of Civil War was ill
Only A few Days.

Captain George Washington Burleson died at the home of H. C. Pomeroy in St. Albans, July 19, of angina pectoris. He had been very ill since last Wednesday. The funeral will be held Wednesday at the house at 1:30 p. m. and interment will be in the family lot at the East Fairfield Cemetery at 2:30.

Captain Burleson was 75 years of age. He was born in Franklin and attended the public schools. At the out break of the Civil War, at the age of 16, he enlisted in Co. K, 6th Vermont regiment, and served throughout the war, having the rank of Captain when discharged.

After his discharge he studied law, and practiced for a time, but about 30 years ago entered the customs service, where he remained, acting as special deputy with offices in Saint Albans.

He was a member of the G.A.R. , and a 32d degree Mason. He is survived by one son, George F. Burleson of Johnson, and one daughter, Mrs. Emma Hill, who made her home with him.