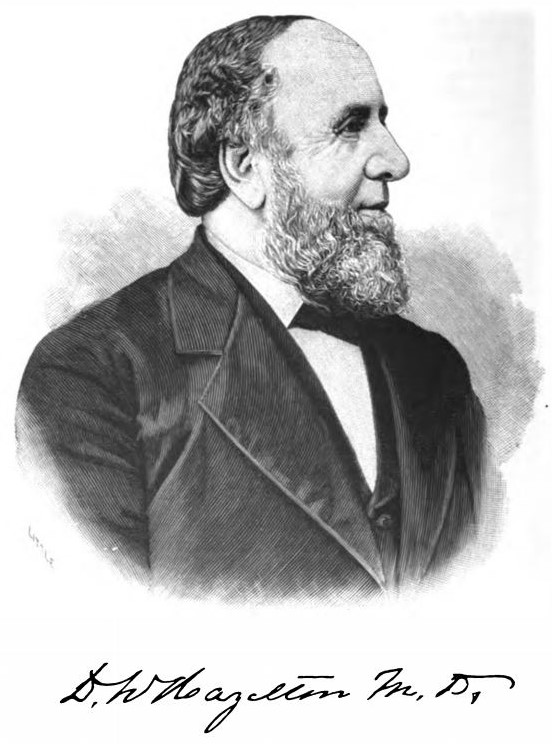 DR. DANIEL W. HAZELTON, son of Daniel and Mary (Walker) Hazelton, was b. in Hebron, N. H., May 11, 1824, being the eighth child in a family of nine children. He had an academical course of study in his native town, and commenced the study of medicine with Prof. Gilman Kimball, M. D., of Lowell, Mass. He graduated from the Vermont Medical College at Woodstock, Vt., in 1848. The following year he was appointed house physician of one of the city institutions of Boston, then located at South Boston, now on Deer Island. He first started in his chosen profession at Antrim, N. H., in 1850, and remained there three years, when he was obliged to relinquish his practice for one year, owing to ill health. In 1855 he located at Stoddard, N. H., where he practiced till the spring of 1871, when he removed to Cavendish, Vt. He remained at the latter place until 1879, when he removed to Springfield, where he is now located.

In the fall of 1861, the first year of the late war, Dr. Hazelton was one of the four surgeons commissioned by Governor Holbrook of Vermont as a surgical reserve force to be called to the assistance of the Vermont surgical staff in the field whenever emergency required. He was accordingly ordered to the front from time to time during the war to act as surgeon in some of the most notable engagements of the war.

While at Cavendish he represented the town in the Legislature in 1876. He is a member of the Vermont State Medical Society and of the Connecticut River Valley Medical Association. Dr. Hazelton m. Laurette Hammond, eldest daughter of John C. and Nancy (Ladd) Hammond of Hebron, N. H., Nov. 5, 1850. She d. at Springfield, Sept. 15, 1892. Dr. and Mrs. Hazelton had two children, the elder,

I. Frank Henry, d. when a youth, at Cavendish, Vt. The younger,
II. William French, was born at Cavendish, Jan. 5, 1860. He fitted for college at Vermont Academy, Saxton's River, and afterwards studied medicine at the University of Vermont and in the medical department of Columbia College, in New York City, otherwise known as the College of Physicians and Surgeons. From the latter institution he was graduated in 1884 with a class of one hundred and fifty. At his graduation he received from Columbia College an appointment to the house staff of Bellevue Hospital, being one of the four which are made annually and are given to the graduates ranking highest in their examinations for the degree of Doctor of Medicine. He served in this hospital eighteen months. He m. Dec. 29, 1892, Grace Atherton, second daughter of Capt. Henry B. and Abbie (Armington) Atherton, of Nashua, N. H., and is now associated with his father in the practice of his profession in Springfield.

Dr. Daniel W. Hazelton, 76, of Springfield, one of the oldest physicians in the southern part of Windsor county, died Thursday afternoon at the rooms of his son, Dr. F. W. Hazelton, in Towns hotel, Brattleboro. Dr. Hazelton came to visit his son and was taken ill with grip, which developed into pneumonia. He practiced in Springfield about 25 years, accumulated a comfortable fortune and sold his business on account of his advanced age. His wife died several yrs ago. Funeral services were held in the old church in Cavendish, Dr. Hazelton's native town, Monday.