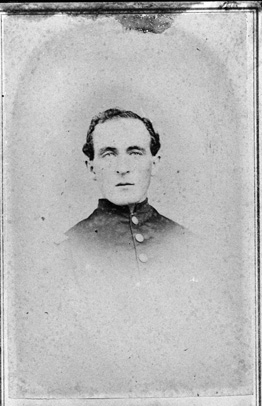 George Harvey Burns, 71, for the past 30 years a resident of Brattleboro, died at his home on Washington street shortly after midnight Sunday of cancer of the stomach. Although in poor health for a long tine he had been able to work until about two months ago and was confined to his bed only a day. Mr. Burns was born in Whitingham, March 27, 1833, one of 12 children of William and Hannah Clement Burns. When four years old he moved wit his parents to Halifax and lived there until the outbreak of the Civil war. He married May 23, 1858, Mary A. Witt, daughter of the late Judge Jonathan Witt of Wilmington. Mr. Burns enlisted in Company F, 16th Vermont volunteers, Sept. 3, 1862, and was at once made second lieutenant. He went as far south as Washington with his regiment but was obliged to resign his commission on account of ill-health, getting his discharge Feb. 19, 1863.

On his return Mr. Burns lived for a time in Wilmington and then removed to Dorchester, Mass., going from there to the west where he made his home for a time. In 870 Mr. Burns and his wife returned to Brattleboro and had since lived here. Mr. Burns worked for a while in the Estey Organ factory, but during the greater part of his life in this town had been employed as a grocery clerk. His last position was in the grange store. He is survived by a widow and one daughter, Mrs. William Lewis of West Springfield, Mass.; also three sisters, Mrs. Clara Benjamin of Brownton, Minn.; Mrs. Fannie Fisher of Chicago, and Mrs. M. E. T. Faunce of Providence, R.I.

Mr. Burns was much interested in Masonry being a member of Columbian lodge, F. And A. M., Fort Dummer chapter, R. A. M. Connecticut Valley council, Beauseant commandery, Knights Templar, and the Mystic Shrine. He also belonged to Clerks post, G.A.R., of Halifax, and had been a member of the First Baptist church for many years. Mr. Burns was a an of courteous disposition and genial temperament, and had a large circle of friends.

Mr. Burn's funeral took place Wednesday afternoon at 2 o'clock from his late home, Rev. George B. Lawson officiating. A portion of the service was in charge of Beauseant commandery, Knights Templar, and a delegation from Sedgwick post, G.A.R., was present. The bearers were: J. A. Taylor, J. Henry Pratt, H. E. Taylor, C. L. Piper, Henry Simonds and C. F. Thomas. The body was placed in the vault in Prospect Hill cemetery.