Alias?: None noted
Pension?: Yes, 1/31/1885
Portrait?: Unknown
College?: Not Found
Veterans Home?: Not Found
(If there are state digraphs above, this soldier spent some time in a state or national soldiers' home in that state after the war) 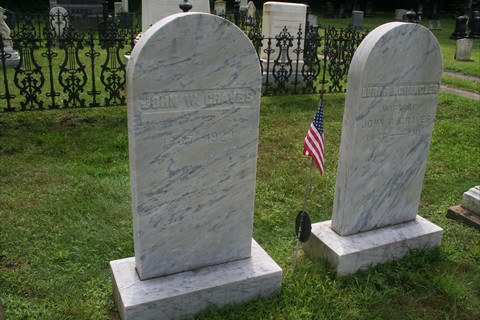 Vermont Veteran of the Civil War Dies at Home of His Niece in This City.

John Wellington Graves, 86, a Civil war veteran, died yesterday at the home of his niece, Mrs. Kate G. Alexander, 64 Grant street. Mr. Graves was born in Walpole, N.H., June 2, 1837 and had been a resident of this city for the past nine years. He served in the Civil war as a member of Co. F, 4th Vermont regiment and was a member of the Grand Army post in Bellows Falls, Vt. He also was a member of the Baptist church of Saxton's River, Vt. He leaves a daughter, Mrs. Frank P. Whitcomb, of Laguna Beach, Cal., a granddaughter, two great-grandchildren and the niece with whom he made his home. The funeral will be held at the Dickinson-Streeter parlors tonight at 7. The body will be taken to Saxton's River for burial.