This newspaper clipping was folded inside the 1865 Diary of Edwin A. Stebbins, 11th Reg., Co. G. There was no indication of where it had been published, but we found it in the Orleans independent Standard, Feb 24, 1865, page 4, column 2. It was also in The Caledonian, February 17

The Flag of the Old Brigade

Captain Merritt Barber, A.A.A.G. on the staff of Brevet Major General L.A. Grant, has transmitted to Adjutant General Washburn the flag of the Vermont Brigade, or what remains of it, together with a record of the engagements in which it has headed that Brigade during the past summer, which are as follows:

Such is the record. In a campaign of a little over five months duration sixty-seven days of battle, and during the whole time this little brigade of Vermonters was always foremost, in the thickest of the fight, and never flinched a hair. With the old "rag" to lead them on they never knew confusion or defeat, notwithstanding more than one half their entire number at the outset were killed or wounded. A more brilliant record was never made by an equal number of soldiers.

The flag is a small triangular one of dark blue with a large white cross in the centre, and was used to denote the whereabouts of the commanding officer or of the headquarters of the brigade. In battle it was the rallying point. It is all in tatters, and although coarse in material it is big with history. The enemy's shot and shell have made sad havoc with its dimentions, but it never for a moment passed out of the hands of its brave defenders and was never lowered to a foe. With the record which accompanies it, and which is handsomely prepared by some dexterous penman, it will be placed in an appropriate place in the State House, there, with other mementoes of our fallen braves, to become a shrine at which posterity may assemble to renew their patriotism and their vows of fidelity to the precious boon of liberty and free government bought with the best blood of the land. 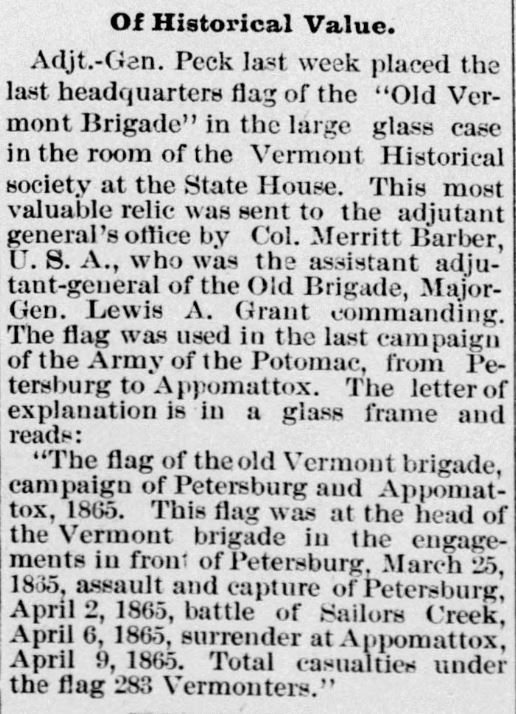