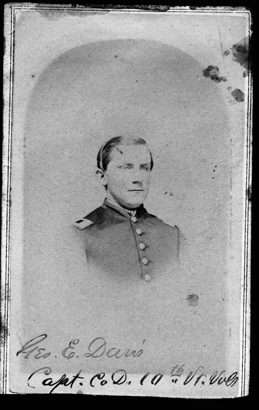 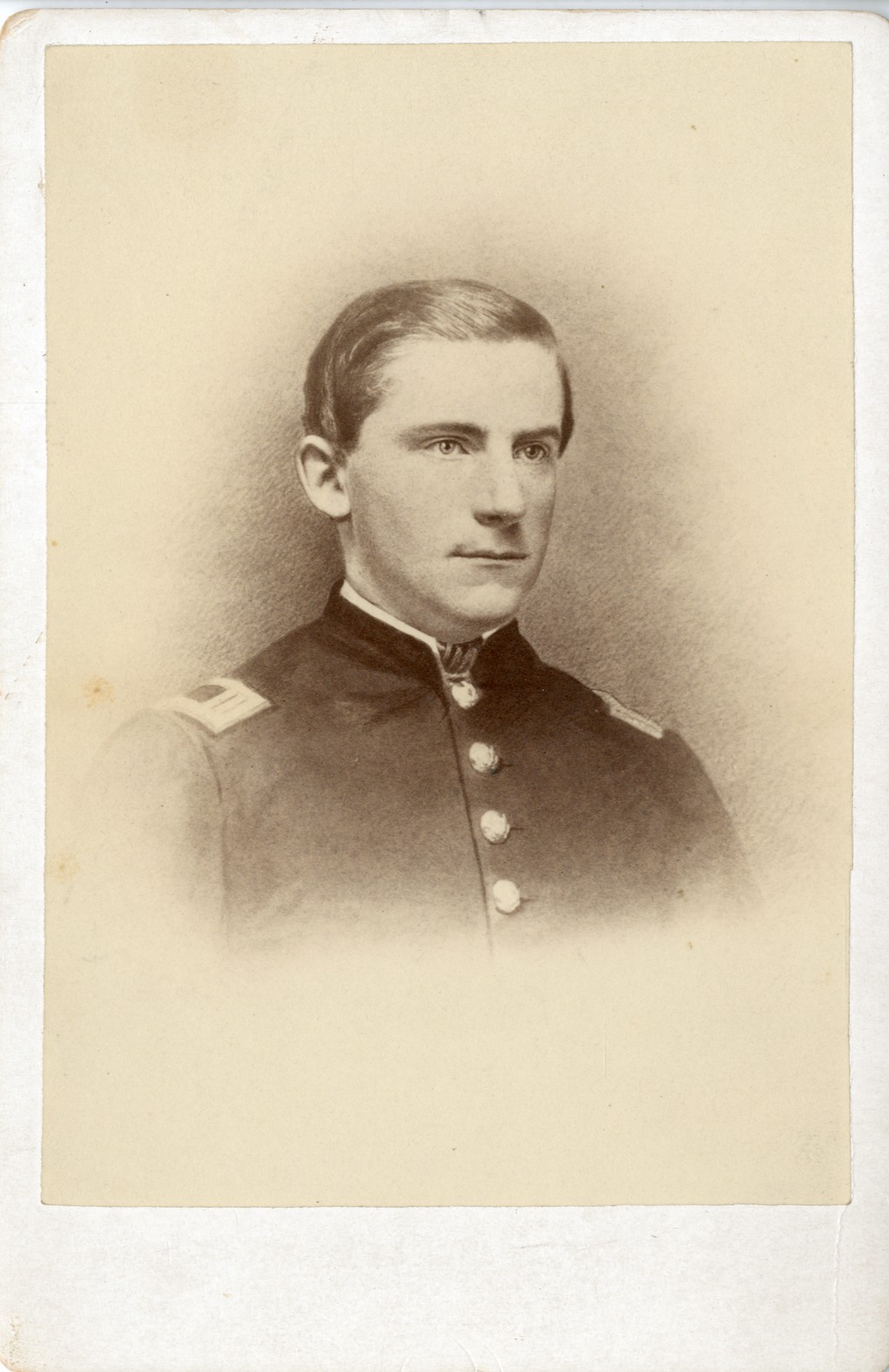 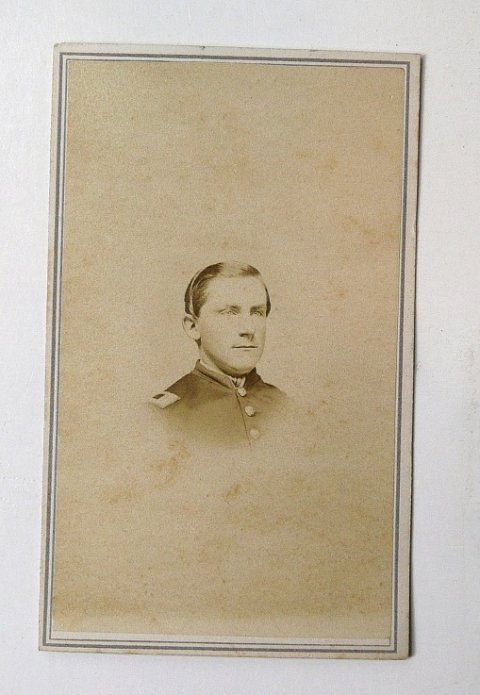 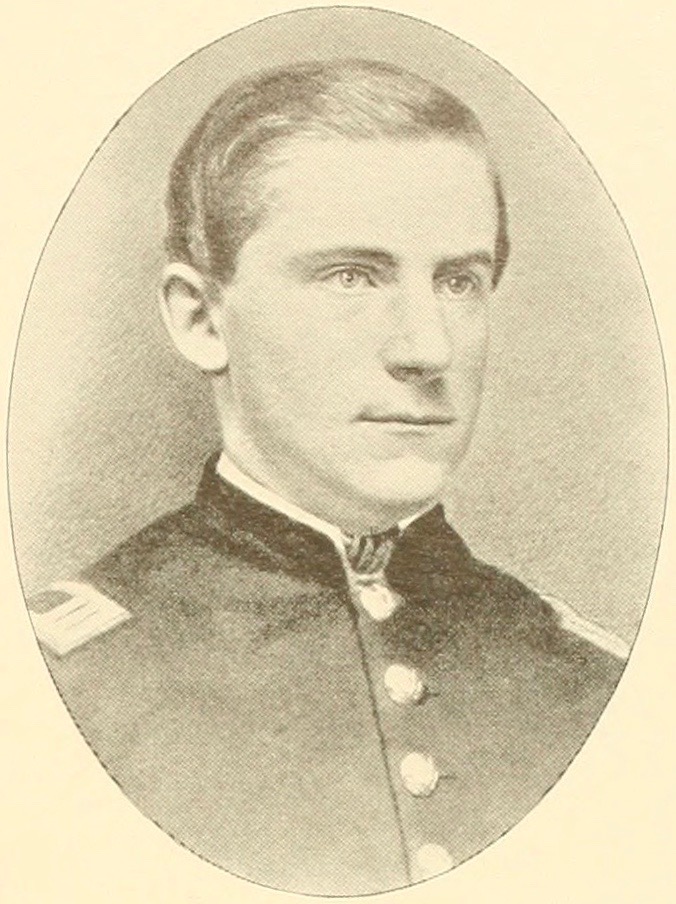 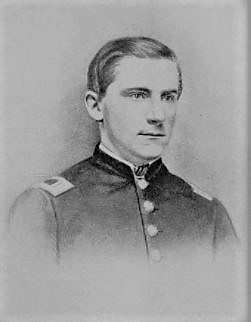 George Evans Davis (the eighth generation from James Davis of Gloucestershire, England, 1599) was born Dec. 26th, 1839, in Dunstable, Middlesex county, Mass., the seventh child of Deacon Mial and Lucy Davis. He enlisted April 19th, 1861, in Burlington, Vt., for three months, in Co. H, First Vermont Infantry, and was in the battle of Big Bethel, June 10th, 1861, as a private, and was mustered out Aug. 15th, 1861. He reenlisted in Burlington, vt., as a private, for three years, July 31st, 1862, in Co. D, Tenth Vermont Infantry; was promoted to Second Lieutenant of the same company after going into camp, being mustered into the service of the united States Sept. 1st, 1862; promoted first Lieutenant, Jan. 26th, 1863; promoted Captain of same company Nov. 2d, 1864, and honorably discharged at the end of the war, June 22d, 1865. He was commended in writing for bravery at the battle of Locust Grove, Va., Nov. 27th, 1863, by his Captain. He was in the battles of the Wilderness, Spotsylvania, North Anna River, Totopotomoy Creek, Monocacy, Opequon, Fisher's Hill, Cedar Creek, and was under constant fire at Cold Harbor, June 6th to 9th, but was in hospital sick all the month of June, except the four days just named. At the battle of Opequon his right ear was cut open by the shell that killed Aaron P. Knight of Co. H, and at Cedar Creek was wounded by a minie ball in the left shoulder. From Aug. 1st, 1864 to January, 1865, he was in command of Co. H. March 23d, 1865, while on duty as Brigade Officer of the Day in camp, before Petersburg, he was severely injured in the had and spine, by being buried in the ruins of a log cabin that was blown by a whirlwind. THis kept him out of the closing battles of the war and has caused him constant suffering since 1875.

Captain Davis has been frequently mentioned in these pages in connection with interesting incidents, and much more might be said about his good qualities as a man and a soldier, which he possessed in common with his brother officers, but had had one notable characteristic, or habit--hi was an inveterate writer of letters. Besides keeping a complete diary of occurrences, neatly written with pen and ink, attending promptly and methodically to his company reports, pay-rolls and all military papers, he seemed to improve the time when not engaged in other duties in corresponding with his friends. His industry in this respect was simply prodigious. No march was too exhausting, no battle to severe, to cause a suspension of this habit for forty-eight hours at a time. Unquestionably he suffered cheerfully and bravely the privations common to us all, oftentimes being deprived of rations, sleep and rest, but he never was without pen, ink and paper, or a disposition to use them when occasion permitted. And to the custom of carrying these materials, he owed his life, on one occasion, at least. It was during the battle of Cedar Creek; while his company was changing position during the action, he was hit by a musket ball, with full force on the shoulder-blade, and nothing prevented it from passing through his body with fatal results but a few quires of letter-paper in his haversack,which at the time, for the conveniences of carrying, was swung over his shoulder. The stationary was crimpled, some of it spoiled, his shoulder badly bruised, but the ball was turned from its deadly course by this little white shield of paper.

Letter from Davis to Chaplain E. M. Haynes, describing his part in the battle of Monocacy.