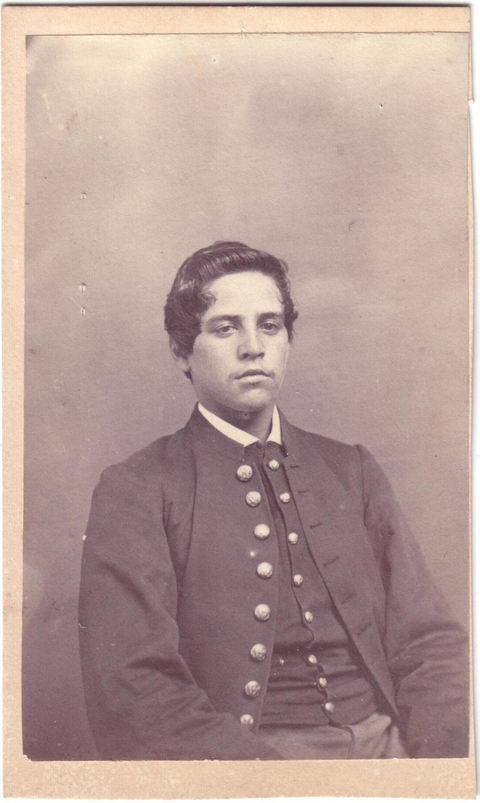 In his history of the town of Alburg, the late Allan Stratton mentioned "Four Indians" as enlisting for the Civil War, but did not name them.

Joseph Bero, Peter Laflin, David Loran, and George Squires enlisted in Alburg on 15 December 1863, and were sent to Brattleboro, arriving there on the 18th.

Among the remains of the Adjutant General's records after the disastrous fire in 1945 were the enlistment contracts for Bero, Laflin and Squires (listed as Square), listing their place of birth as St. Regis, and recruit declarations for them, tentatively assigning the recruits to Co. E, 1st Vermont Cavalry, according to their "Declaration of Recruit" forms.

"Teaching my Indians how to do picket duty."

Laflin was assigned to Co. F, 1st U.S. Sharpshooters, and was killed in action at Weldon Railroad on 22 June 1864. He is apparently buried in an unmarked grave in Virginia.

Loran died 21 March 1885 in Brasher Falls, New York. His final resting place has yet to be determined (He is incorretly listed by the Sons of Union Veterans Burial Registration database as buried in Riverside Cemetery, Union City, Michigan.)

Squires died 3 May 1900, aged 55, and is interred in the Mohawk Council Cemetery, Hogansburg, NY.

There may be a fifth man. Although his Compiled Military Service Record indicates he was born in Clarendon, VT, Alonzo Levins was born in St. Regis in 1844, moved to the Rutland area as a child, served in Co. H, 6th Vermont Infantry, and died in 1939, the last surviving G.A.R. member in Rutland. Interment was in Evergreen Cemetery, Rutland. There is currently no further indication of his ethnicity.

Extracts from pension file for Sarah Loran, widow of David. including his date and place of death, his identification as "an Indian" in a physician's deposition, and depositions by Joseph Bero and George Squires, lifetime friends of Loran. www.nedoba.org.