When I was captured my weight was 225 pounds and when discharged I was reduced to a little over 100 pounds and my clothes were so worn that they hardly covered my body and when I beheld myself in a looking glass I could not believe it was D. M. Barr. 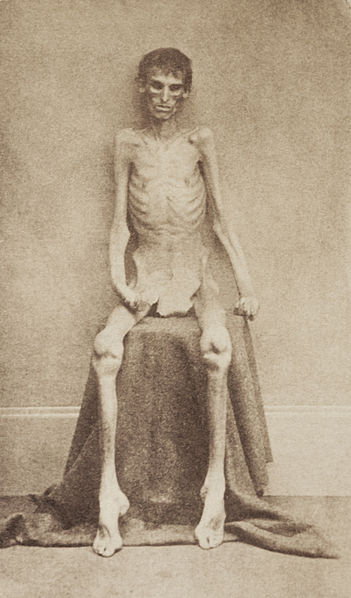 Andersonville Survivor
Courtesy of Library of Congress The crowded military prison in Richmond received some relief, on February 27th, 1864, when a new prison camp was set up near Americus, Georgia. Actually called Camp Sumter, it was most often known as Andersonville. From the very beginning, living conditions were unbearable due to lack of medicine and food, and inadequate sanitation, and it got much worse!

"In this connection might be related the sad experience of six prisoners captured in the morning at Cedar Creek (19 Oct 64 - ed.), who were sent to Andersonville. Their captors had plundered them of nearly all their clothing, so that they were exposed to an inclement atmosphere with no adequate protection, and during the chilly nights they nearly perished with cold. To better their miserable plight as far as possible, the poor fellows dug a hole in the ground, into which they crept to sleep at night, in lieu of a bed. They had only two blankets, but they huddled together as closely as possible, and once in an hour or two the outside man, who was most exposed, exchanged places with one in the middle, and in that way contrived to drown his sufferings in sleep. One unusually cold night Thomas Henchey occupied the outside place during the first hour after midnight, but when the others tried to rouse him to get up and take the warmer berth, he made no response; he was dead. A horror fell on his five companions, nor did they dare go to sleep again that night, lest they to share the fate of poor Tom."

"Chauncey F. Hartshorn, age 18, son of H. Hartshorn, born in Greensboro; enlisted at Northfield, Jan. 1, '62, in Co. K, 17th (should be 7th - tl) Reg.; mustered in at Brattleboro, Feb. 12; was at Camp Parapet, Ship Island, N.O., also at Camps Williams and Carney; sent to the general hospital, at N.O., sick with diphtheria; remained 2 weeks; sent to the regimental hospital; remained until discharged, Feb. 25, '63; participated in the battle of Baton Rouge; re-enlisted at Greensboro, Dec. 6, '63; mustered in at Brattleboro, Jan. 5, '64, for Co. D, 4th Reg; went immediately to the company at Brandy Station, Va.' remained with it, participating in the battles of the Wilderness, Spotsylvania, North Anna River and Petersburg, until taken prisoner at the Weldon Railroad, June, 24, '64; sent to Lynchburg, Va; marched thence rapidly to Danville, 75 miles; furnished with short rations, 20 hard crackers or pilot bread, and three-fourths pound bacon only, being allowed for 5 days, and water given three times a day; with the other prisoners kept at Danville a week; sent to Andersonville, Ga., by railroad; placed in a stockade or prison with 32,000 others, subject to the following treatment: rations per day, 1/2 lb corn-meal, 1/4 lb meat, plenty of water, muddy and extremely filthy; no coffee nor tea; when corn and meat not given, 1 pint cooked rice, or 4 table spoonfuls uncooked, and a very little molasses, allowed only half a blanket; suffered extremely with the cold; sick with scurvy and diarrhoea; exchanged Nov. 20, '64, on account of sickness; went home for 40 days, rejoining his company Mar. 1, '65; participated in the capture of Richmond; discharged with the company July 13, '65; received $300 bounty from the town, and $400 from the government." quoted from the Vermont Historical Gazetteer, Volume III, Orleans and Rutland Counties. (Contributed by Bonnie Dannenberg, great-great-granddaughter of Chauncey Hartson)

Very early on in the project (within 8 months of its start), we received the following, which situation has been since resolved. But it is encouraging to see young folks interested in Vermont's heritage!.

Subject: VT and the War Between the States
Date: Tuesday, 10 Dec 1996
From: "Jon P. Hughes" (jhughes@liberty.uc.wlu.edu)

I'm a student at Washington and Lee University in Lexington, VA (burial place of Gen. Robert E. Lee, and the only job he held after the war was as president of this fine institution). I recently visited Andersonville National Cemetary in Georgia and was upset to find that the state of Vermont has not dedicated a monument to her Union oldiers who perished there. It has been estimated that over 250 VT soldiers died there, yet Vermont is only one of five (I think) states that did not dedicate a monument. There is one put up by the Daughters of the Grand Army of the Republic for those states who did not dedicate a monument, but I was disappointed to see that VT did not invest her own time or money into this tribute.

I'm from the beautiful state of Vermont, but there's no place like history rich Virginia for Civil War buffs. I love it here. I'm within walking distance of Jackson and Lee's graves! In fact, most of Lee's family in buried in Lee Chapel as well. The Virginia Military Institute is next to my campus, and they have a great museum. Well, I just thought you might be interested in the little tidbit of info. about Andersonville. Feel free to reply to this message at: jhughes@wlu.edu.