"The 30th of May, 1868, is designated for the purpose of strewing with flowers, or otherwise decorating the graves of comrades who died in defense of their country during the late rebellion, and whose bodies now lie in almost every city, village and hamlet churchyard in the land." - General John A. Logan, May 5, 1868, calling for a nationwide day of rememberance later that month.

It didn't quite become a common event; the former Confederate states held their own on different dates until after World War I, beginning even before the G.A.R. event!!

""Telegraphic News - Atlanta, May 12. Confederate memorial day in this place was celebrated Sunday last from 2 to 6 P.M. The ceremonies and services were very impressive. Ten thousand persons were present. Gen. Meade was among the speakers." - Express and Standard (Newport), 12 May 1868.

"Decoration Day is the name the Southerners have bestowed upon the day they strew flowers over the graves of the Confederate dead." - Rutland Daily Herald, 20 May 1868.

"An Incident of Memorial Day--The Lafayette (Ind.) Courier, in its account of the decoration of soldiers' grave in that city on the 30th ult., says a wreath of flowers, accompanied by a note from a little girl about ten years of age was exhibited. The note was addressed to Col. Leaming, Chairman of the Committee of Arrangement, and was as follows:


Col. Leaming:--Will you please put this wreath upon some rebel soldier's grave? My dear papa is buried at Andersonville, and perhaps some little girl will be kind enough to put a few flowers upon his grave. -- Jennie Vernon.


The reading of the note created a profound impression, and the wreath was deposited upon the grave of an unknown soldier - the only one remaining in the cemetery." - The Daily Journal (Montpelier), 11 June 1868

"Decoration Day -- Sunday, the 30th day of May, has been designated by the Grand Army of the Republic as the day for strewing the graves of Union soldiers with flowers." -- Rutland Weekly Herald, 29 April 1869.


"Memorial Day. -- Monday, the 30th instant, having been designated for the annual ceremony of decorating the graves of deceased soldiers of the rebellion, Post Roberts, No. 14, Department of Vermont, G.A.R., held a special meeting last evening at the parlors of the Central House, to institute measures for the proper observance of the day." -- Rutland Weekly Herald, 5 May 1870.

"Decoration Day comes this year as usual on the 30th instant. It is fitting that this tribute of respect and love be paid to the memory of our fallen heroes. Let the people show their gratitude to those who have sacrificed so much, if in no other way, by lovingly and reverently strewing their graves with flowers, the emblems of the heart's emotions of gratitude and affection for the noble departed." -- Middlebury Register, 10 May 1870.

"-- Preparations for the observance of "Decoration Day" -- May 30 -- appear to be very generally instituted throughout the country." -- Vermont Phoenix (Brattleboro), 5 May 1871.

Decoration Day.
Editor Free Press and Times:
Decoration Day is becoming more generally observed as a national holiday, year by year. In this city, there is no day so well observed by the citizens as this one. The expenses, as I am informed, have been defrayed by the contributions of citizens, usually reading $150. While many of the larger towns in the country appropriate a sufficient sum for this purpose from the common treasury, would it be asking too much of our city fathers, to provide for the expense in this manner. Certainly, a few should not be called upon to contribute alone for the enjoyment of the many. The authorities of Boston have appropriated $200, to each GrRand Army Post, to defray the necessary expenses of the occasion. The soldiers, as a class, are men of moderate means, and any aid in this respect would probably be appreciated. Yours Truly,
Citizen.
-- The Burlington Free Press, 8 May 1872.

"Decoration Day.-- The ladies of Addison propose to have the return of this memorable day duly observed in their tow, and to that end will have exercises in the town hall, and provide refreshments for all who may attend. An occasion of more than general interest is looked for." Middlebury Register, 13 May 1873 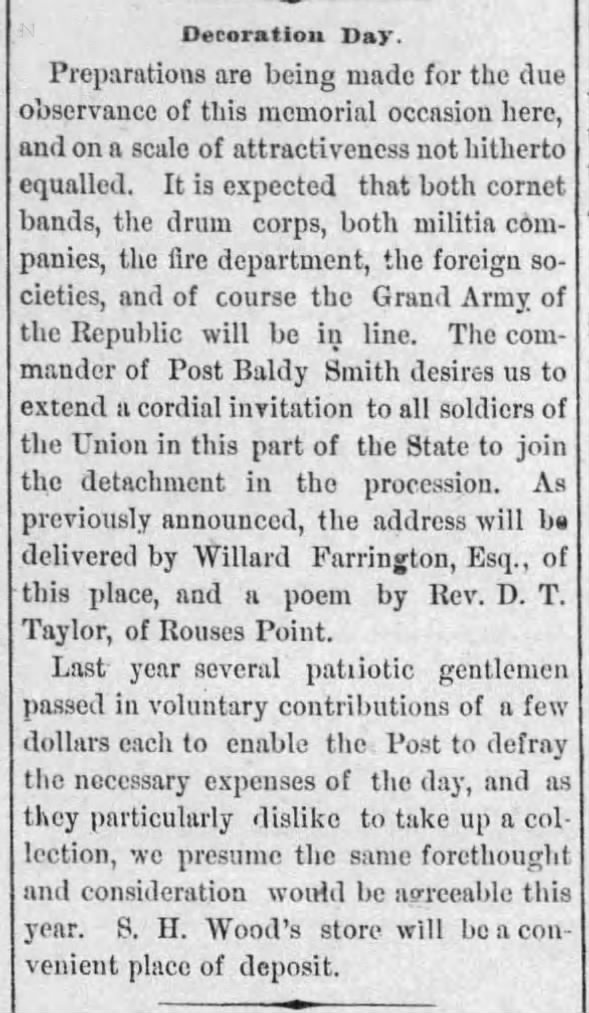 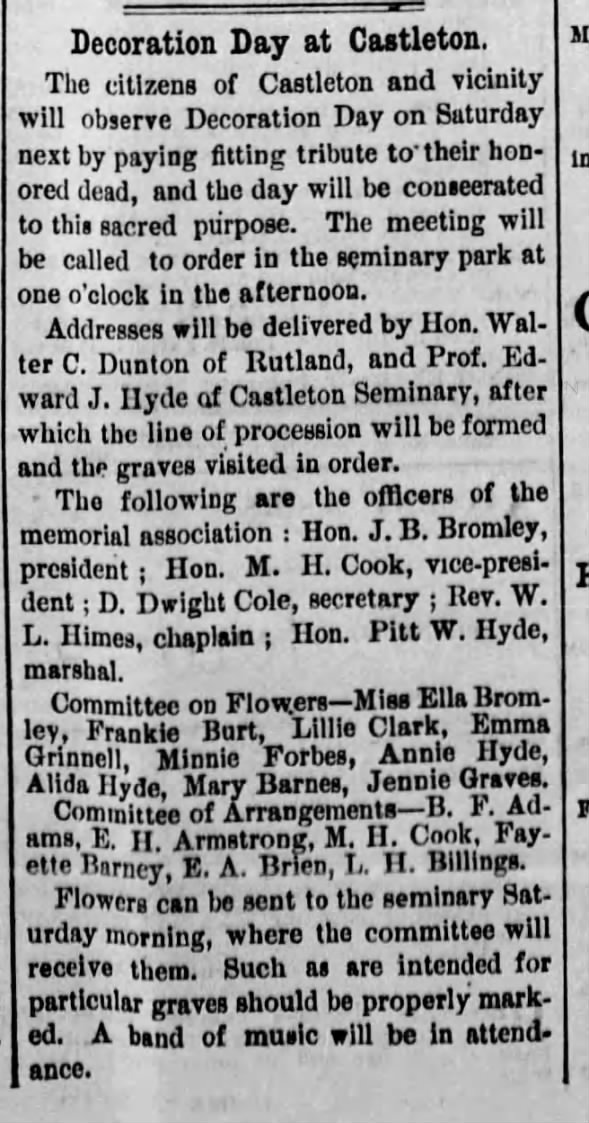 Memorial Day at East Middlebury. -- The Decoration-day address at East Middlebury will be made by Mr. Frank C. Partridge, head clerk in the office of the Producers' Marble company, Rutland. The exercises will be under the direction of Needham Post, No. 68, G.A.R. -- Middlebury Register, 1 May 1885

Vermont Public Acts, 1894.
No. 25. -- AN ACT SETTING APART A PORTION OF A DAY TO THE TEACHING OF PATRIOTISM IN THE PUBLIC SCHOOLS.
It is hereby enacted by the General Assembly of the STate of Vermont:
SECTION 1. The last half-day's session of the Public Schools before Memorial Day shall be devoted to exercises commemorative of the history of this nation during the War of the Rebellion, and to patriotic instruction in the principles of liberty and the equal rights of man.
Approved November 1, 1894. - Artus and Patriot (Montpelier), 2 Jan 1895