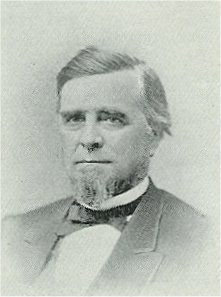 Royce, Homer E[lihu]. Congressman, and chief justice of the state Supreme Court, was born at Berkshire, June 14, 1820, the son of Elihu Marvin, and Sophronia (Parker) Royce. His ancestry in his father's side traces back on both directions to the fathers of the state, Maj. Stephen Royce and Ebenezer Marvin, and he was a nephew of Gov. Stephen Royce. His maternal grandfather was Rev. James Parker, the first settled minister of Underhill and long known as an able preacher of the Congregational denomination.

Young Royce was educated in the district schools and at the academies in Saint Albans and Enosburgh, studied law with Thomas Childs, was admitted to the bar in 1844, was in partnership for two or three years at East Berkshire with Mr. Childs, and afterwards for about the same time with his relative, Heman S. Royce. He was state's attorney for Franklin county in 1846 and '47. In the same year also he represented Berkshire in the Legislature, was chairman of the railroad and a member of the judiciary committees, which had some difficult work in a hitherto unexplored field in guiding legislation upon the relations of the railroads to the state. In 1849, '50 and '51 and again in 1861 and '68 he was elected to the state Senate from Franklin county, doing his most notable work on the judiciary committee.

Professionally and politically he had come to be recognized as a man of brilliant parts and comprehensive reach of mind, and in 1856 he was elected a representative in Congress, being the youngest member of that body, but taking quite an active part for a new member, serving on the foreign affairs committee, and attracting attention by his speech on the Cuban question, which was at that time deeply agitating the country.

Retiring from Congress he resumed his professional practice with increasing renown, until in 1870 he was elected justice of the Supreme Court, and regularly re-elected until in 1882, on the death of Judge Pierpoint, Governor Farnham appointed him chief justice, a position that he held by regular re-election, though once or twice with a spirited contest, until his death. It was under him as chancellor that the long and involved litigation of the Central Vermont R. R. arose. Many of his opinions, notably as to the disqualification of jurors, as to what constitutes an expert, and as to the rights of riparian owners, are often quoted.

Judge Royce was prominent among the promoters of the Missisquoi R. R. In 1882 he received the degree of LL. D. from the University of Vermont.