Luman Adolphus Ballou (July 1, 1844 - July 15, 1933) served in the War of Rebellion and lived to return home to Vermont. These are his journals, kept during the period he served 1864 through 1866. On Aug. 23, 1864, according to a regimental roster (Dec. 16, 1863, by his record), he was accepted for service. His very close friend, Charles A. Roberts (they are buried near each other in North Rupert) joined Feb. 14 of that year. Though Luman had little formal education, he carried a simple wooden writing box, 12 by 8 inches and 2 inches deep. In it were his journals and presumably paper, pen and ink, stamps and other personal items. During this period of service he kept a daily record of his activities.

His spelling and grammar have not been changed in this transcription, nor his punctuation or lack of it. Bracketed items may clarify some of what he described. At the end of most entries he noted the weather, below and to the right of the entry, with a fine farmer's eye toward conditions. I've include the meteorological report sequentially. 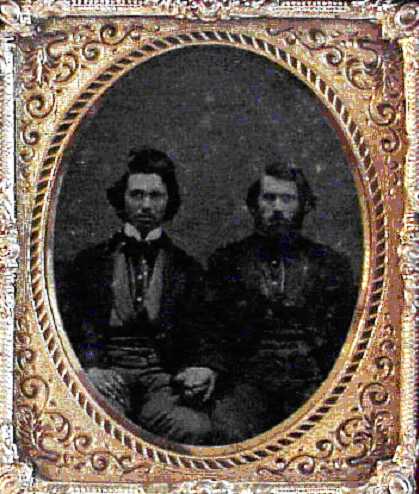 I enlisted into the U.S. Service December sixteenth in the year 1863 to serve three years or during the war. I was mustered into service Dec. 26th at Brattleboro, Vermont. I left Brattleboro Jan. 28th 64 and arrived at Barrancas Fla on the 14th day of February. 64 in our Company moved from Camp Roberts to Fort Barrancas May 18th 64. we stayed in Fort Barrancas until Aug. 8th when a part of the recruits went to Fort Pickens and part stayed at Camp Roberts and the Veterans went home. We moved from Ft. Pickens to Camp Roberts Oct 28th 64. All of us left Camp Roberts November 18th 64 for N. Orleans where we joined our Regiment.

A Memoranda of the days

The drum beats at day break first call. then all must fall out in line in two ranks while the drum Corps plays Several tunes. then each man has to answer to his name which will be called by the orderly sargent. Immediately after roll call breakfast call is played. all go to breakfast at will. If no drill the next call is beet by the drumer a quarter to nine that is to get ready for guard mounting. All that are detailed for guard the night before fall out with their best suit on boots blacked and brases shining. then we stand in two ranks or lines while our guns and equipment are inspected by the officer of the guard or Ajutant. the music is playing all the while. then we march in review. then to our posts where we remain or at the guards house untill nine the next day when relived by the New guard.

Our break first generaly is wheat bread and soft junk which is beef or was once. perhaps a drill from half past nine till half past eleven. the drum Corps play a time for surgeons call immediately after guard mount. then each orderly Sargent of all company will sing out. fall in sick so that all the sick ones if able to go to where the Surgeons office is. Where he excuses and prescribes for them as he thinks best. if very sick they are sent to the hospital. At half past eleven the drum will beet for recall from drill. and the men come running and shouting in the quarters. at twelve the drummer beets first Sargents call which goes to the Capt. for his report book. then fifer and drumer play dinner call. our dinner call will be some times beanes or junk not often potatoes sometimes soop and bread. nothing but bread and coffee for supper.