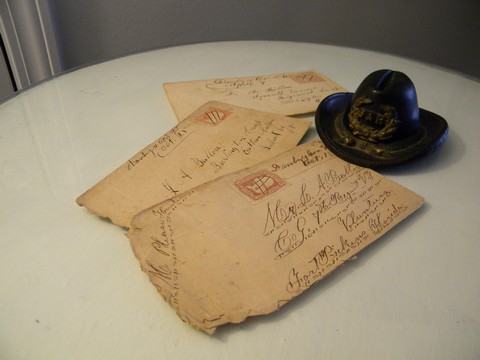 Letters from home in Luman's collection;
paperweight momento of th 1915 GAR Convention Transcript of a letter written by Charles A. Congdon to Luman Ballou, addressed to him at Co. G 7th Regt. Vt. Vol., Fort Barancas, Florida. I have added initial capitalization and sentence periods for clarity.

It is with the greatest pleasure indeed that I spend a few moments in answering your very welcome letter. I am always glad to hear from my old friends in the army but must say I was very sorry to heart that some of our Boys were sick. It is bad enough to be sick at home much worse to be sick away from friends and home in a strange place, but this is the lot of us all and I should be glad if I could say that we were all well and alive at home but I cannot. Many deaths have occurred since you left here and among others of late is that of my brother O.A. Congdon of Mt. Tabor. You knew him. He was in our company you know a stout strong man but he was sick only 10 Days and Died with Dysentery. Mr. Pierces Wife Died but one or two days before and Mr. Howes wife the same day that Mrs. Pierce died. Both lived in the Borough. You know those were all young people - so you see more are exempt from sickness and death. However it is now a general time of health - the Boys of the old 7th have had a jolly time and their money has been spent very freely. I wish that the soldiers would be more prudent and saving but they seem to think that there will never be a rainy day or that they will ever grow old and need something in their old age to relieve them from hard labor or a worse fate. I wish they might all of them save their earnings. It would be better for them and their friends . I have no news to tell you. We are busy in gathering our late harvests which are all plentiful corn good potatoes first rate apples abundant. In short we have never as a general thing had better crops. The long drouth that occurred in the fore past of summer did not seem to affect us as much as it did in other places. Our hay & wheat & oat crop was never better - so you can see we are a good ways from a famine. The granaries of the loyal states were never better filled that they will be this fall. We are short of help but then we make it up in extra work and I am so busy! Can hardly get time to answer my numerous army correspondents still I answer all letters and am glad so to do for it gives me great pleasure to hear from all of you. I have this day written to D.H. Lane in the army of the Potomac before Petersburg and to Joel C. Baker at Newberne, N.C. So you see I have something to do - and so do the boys sometimes. Old Sheridan has been giving the Rebs Hail Columbia up in the Shenandoah Valley. He has defeated Early in several piutched Battles captures some 8 or 10,000 prisoners 20 cannon and lots of other things together with 20 Battle flags. Three cheers for Sheridan. Genl. Grant has within the last few days been making successful movements on Richmond and it is rumored to day that Butler is in the city but I guess not. That would be too good news. But the rebellion is fast collapsing and will soon explode. I hope with terror to Jeff Davis & Co. Copperheads are defunct in the north. McLellan is on the wane. Lincoln is the growing man and is just as sure t be elected as the Ides of November do come. M.O. Williams is at home for 2 or 3 day. Has to leave tomorrow for Burlington. Some of the folks say he looks as though he had slank foal [2 words indecipherable]. He is pretty thin and hard up but will get over it. He told me if he was out of the war he would murder the first man that had the impudence tom ask him to enlist. What a mose [??] You may let Judge Cook, P.A. Broughton & Perry Griffith & others of your and my friends read this and let it answer for all.

On the back of the envelope is this poem: